Back in September, I bought the iPhone 6S (my first ever iPhone!) and I’ve since lusted after an Apple smart watch to sync with it. With the cheapest model I liked being priced at over £300, it seemed fairly overpriced and as much as I wanted one I was struggling to justify it. Nevertheless, I waited for the post-Christmas sales to descend and kept some money to one side just in case. There were a few good discounts that cropped up, but even with £50 off the smart watches still seemed expensive. After hearing the word ‘gimmick’ several times and being told outright that they are overrated, I gave up and started to look at other makes. I was interested in the FitBits but they also seemed steep in price and so I carried on looking for something a bit cheaper. Eventually Darren and I bought two Pebble watches that were on offer at £50 each, but we weren’t pleased with them at all. They were bulky, unsightly and not that impressive tech wise either. We returned both of them the following day. By that point, I’d given up on the idea of a smart watch – but when I returned to work in the New Year, one of my colleagues was sporting a Jawbone UP2 and proceeded to tell me all about it. I had never even heard of the make let alone the model – but I was immediately impressed with the simplicity of its features, namely logging your daily active movement, sleeping pattern and food intake.

When I looked further into the Jawbone UP2 via the Currys website, I learned that it was an activity tracker as opposed to a smart watch and realised that this is actually what I’ve been looking for. The UP2 boasts four key features, activity tracking (a simple way to review the steps you’ve taken and the calories you’ve burned), sleep tracking (capturing the amount of hours you’ve slept and the quality of said sleep), food tracking (calculating all the calories and nutrients you have consumed) and smart coaching (a personalised guide to encourage you to make healthier choices each day). The idea is that you wear the tracker on your wrist everyday (it’s available in either black or grey) and download the UP2 app to your smartphone as an accompaniment. The tracker then transfers the retrieved data through BlueTooth to your smartphone where you can access and assess it as you see fit. I was immediately attracted to the activity tracker as I really liked the look of it. Having looked ridiculous with a bulky Pebble watch strapped to my wrist, I felt that the UP2 looked far nicer. It was slim, it didn’t stand out and seemed to fit snugly. I was even more attracted to the fact that the tracker had been reduced to £39.99 in Currys after a £50 discount. On learning this, I was sold and ordered a tracker immediately!

That was almost two weeks ago and I can honestly say that my UP2 tracker has become a significant part of my daily routine since! I honestly love it. I was pleasantly surprised at how easy it was to set up – literally a case of taking the tracker out of the box, sticking it on charge (via a simplistic USB portal), downloading the UP2 app to my smartphone and pairing the two. It was all very straightforward and within five minutes my tracker was ready to use. As soon as I put it on, I loved how it felt. The band is smooth and made from rubber, meaning you can hardly feel it when you’re wearing it! Although the grey looked great online, the black model blends perfectly with any outfit and never looks out of place.

After a week of constant, regular use, I’ve had plenty of insight into each of the UP2’s features and exactly how they work. The activity tracker is brilliant, detecting the amount of steps you’ve taken each day, the time and duration of the activity, the overall distance that you’ve travelled and the amount of calories that you’ve burned in the process. The default target is 10,000 steps which I’ve only missed out on twice. For a beginner, I’m quite happy with this and I plan to increase my target when I become a bit more ambitious in terms of my fitness levels!

The sleep tracker is very advanced, cleverly sensing the exact time that you fall asleep at night and wake up in the morning. It totals up the duration of your sleep, establishing just how much of it was ‘sound’ and how much was ‘light’. Again you can set a daily target, the default being 8 hours which I’ve kept mine at – and evidently aim to achieve more sound sleep than light. My only criticism is that the tracker doesn’t pick up all the times that I wake up during the night. To be fair though, it does log the times that I move considerably and the times that I get out of bed. So maybe it’s my fault for lying too still when I wake up the rest of the time! 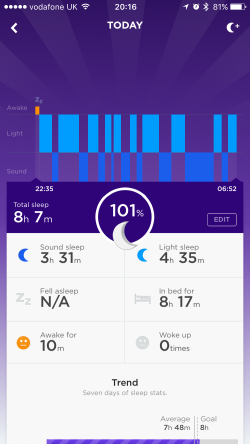 I synced the food tracker feature to My Fitness Pal – an app that I already used on my iPhone to log my daily food intake. From there, the UP2 pulls the amount of calories you’ve eaten and compares it with the calories you’ve burned during activity. Additionally, it totals up your fibre, fat, protein, carbs, sugar and sodium intake whilst calculating a daily score out of ten accordingly. Your score will be lower if you’ve eaten too much fat say, or if your overall intake is below your recommended daily allowance. The trick of getting a perfect 10 isn’t something I’ve managed to work out quite yet but I’m trying! Another thing I like about this feature is that it clarifies exactly which nutrients are good for you and which aren’t. For example, it urges you to limit your carbs and avoid saturated fat where possible. For those that don’t know a lot about nutrition – this is the perfect way to learn more.

The smart coach element is the final feature and it is also pretty cool. It’s like a virtual trainer tailored to you personally. Mine makes focused suggestions and poses personal targets to me including the boosting of my daily steps, morning work outs, drinking more water and taking part in competitions with friends. It’s actually possible to add friends of yours that own an UP2 to your ‘team’ so that you can compare your daily stats and furthermore start a duel – such as who can exceed their step target the quickest and who can sleep the longest? This makes the whole process of owning and using your UP2 even more fun than it already is.

To conclude, I don’t have a bad word to say about the Jawbone UP2 activity tracker! It does everything I want it to and really does give me the encouragement I need to stay active. On a personal note, it’s helping me to feel far less guilty about eating the foods I enjoy – as I can literally see for myself that I’m burning off what I should be. It may not tell the time and it may not have the reputation of an Apple product, but the Jawbone UP2 is absolutely brilliant and I would honestly recommend it to anyone.